In Hollow Knight: Silksong, players will be able to take control Hallownest's very own princess-protector Hornet who we find captured and held captive to be brought into an unfamiliar land. From there Hornet finds herself in the depths of what seems to be a cursed kingdom ruled in Silk and Song, the Kingdom of Pharloom - where she needs to face new foes and meet new allies in order to ascend the peak of a haunted kingdom to unravel the mystery and truth that is wrapped around this new kingdom.

"As Hornet, princess-protector of Hallownest, adventure through a whole new kingdom ruled by silk and song. Captured and brought to this unfamiliar land, Hornet must battle foes and solve mysteries as she ascends on a deadly pilgrimage to the kingdom's peak." 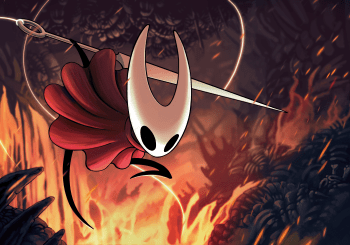 The world of Hollow Knight: Silksong is brought to life a vibrant, moody detail, where it seems that the world players will dive into is a world where it has a mind of its own. Its caverns alive with bizarre and terrifying creatures, each animated by hand in a traditional 2D style where every new area you'll discover is beautifully unique and strange, teeming with new creatures and characters to discover.

This new world of Hollow Knight: Silksong is yet one worth uncovering and exploring just to take in the sights and discover new wonders hidden off of the beaten path.

Imprisoned and taken into an Unfamiliar Land

As Hallownest's princess-protector, Hornet finds herself to be alone in a new and mysterious kingdom where she must face new enemies, encounter and seek the aid of new allies and harness her skills in order to reach the peak of a haunted kingdom.

As Hornet, players will be introduced to an even fast-paced combat system where a whole new set of moves will be available that are suited for Hornet's playstyle. Dance around the battlefield and eliminate those who pose as a threat with elegance and poise.

Discover and craft brand new tools that are made specifically for Hornet's arsenal. From a selection of traps, mechanisms both for offensive and defensive schemes, the introduction and usage of tools will allow players to have more variation and will aid them to explore the kingdom with ease.

A Heart-thumping and Soulful Orchestral Score

Composed and Produced by Christopher Larkin, Hollow Knight's award-winning composer returns for a brand new score specifically made for Hornet's brand new adventure that will surely allow players to fully immerse themselves into the world of Hollow Knight: Silksong.